But not everyone was happy.Some doom-mongers grumbled that Steinmeier was much too important for him to be "consigned to the periphery of power."After all, as Torben Luetjen and Lars Geiges wrote in their biography of Steinmeier, German presidents "don't really have to make many decisions."That all changed on Monday.After coalition talks to form a new government unexpectedly collapsed late on Sunday, dealing a blow to longtime Chancellor Angela Merkel, it was President Steinmeier — a man more accustomed to unveiling monuments than dirtying his hands with parliamentary politics — who was given the unenviable task of restoring order. This week he's meeting with five party leaders, urging them to restart talks — or begin new ones. If they refuse, Steinmeier is the man who could set the country on a complicated path to new elections — unprecedented in post-war German history."Courage is the lifeblood of democracy," he said in his first speech as President in March this year. He'll need plenty of that in the days and weeks ahead.So who is Frank-Walter Steinmeier?

Steinmeier's journey from a working-class home in northwest Germany — his father was a carpenter and his mother a factory worker — to the office of the President is a remarkable one.But he's otherwise unremarkable, according to Luetjen. "There's nothing extraordinary about him … He's usually described as someone rather dull."Steinmeier's first foray into politics came in 1991 when he took a job with Social Democrat Gerhard Schroeder — state president at the time and later German Chancellor — and was soon running his office.According to Luetjen, Steinmeier quickly began to fit the mold of a typical German bureaucrat. 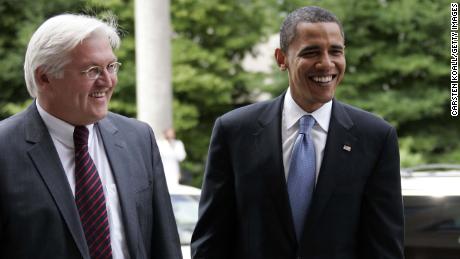 His two stints as Foreign Minister — during which he tackled a military crisis in Ukraine, Greece's financial meltdown and unprecedented levels of refugee arrivals to Europe and was instrumental in negotiating the nuclear deal with Iran — only confirmed that impression. He may not be "overly exciting," as Luetjen admits, but he's pragmatic, patient and rarely fazed."He's good at finding deals and talking to all sides," says Luetjen. "Now that we have this situation — close to a constitutional crisis — those are talents that are really needed."

Steinmeier's nomination as President came as a surprise to many. He's a man who "enjoyed real power," Luetjen explains. In the aftermath of the Second World War, the previously powerful role of President became largely ceremonial.He or she is the public face of the nation, a German ambassador to the world. When Steinmeier speaks, people listen.But he's not known as a great speaker. And "he didn't seem comfortable with becoming a public figure" at the start of his presidency, Luetjen says. 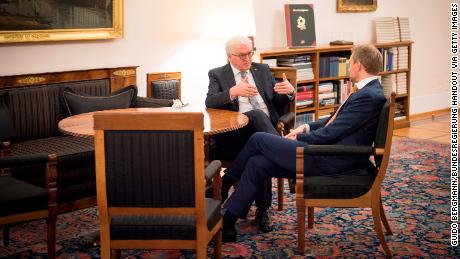 He believes that Steinmeier — the deal maker, the man who "likes to get things done" — will be embracing the challenge of restoring order in the currently chaotic German political landscape."Now he's back, doing real politics," Luetjen says.

What are his chances of success?

Luetjen and Geiges describe Steinmeier as the "master of anti-chaos." "If anyone can (make a breakthrough), then it's him," says Luetjen. "Yes, I think he's capable of doing this."Making a brief statement from his official residence on Monday afternoon, Steinmeier had the aura of a disapproving school principal admonishing a group of unruly students.He urged all parties to come to the table and refused to entertain the possibility of fresh elections — the option favored by Merkel and Martin Schulz, leader of Steinmeier's own Social Democratic Party. "I expect everyone to be willing to negotiate to make it possible to form a government in the foreseeable future," he said. Responsibility can't simply be "handed back to the voters." 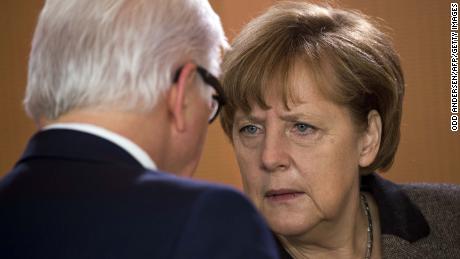 For all his caution and composure, Steinmeier does not mince his words. Three months before Donald Trump was elected US President, Steinmeier (then foreign minister) described him as a "hate preacher."And speaking just after Trump's election, Steinmeier made no attempt to disguise his deep disappointment. "Nothing will be easier (now)," he said, "lots will be more difficult."He has even been described in the German media as the "anti-Trump." Steinmeier has spoken out strongly against the rise of populism in Germany too, embodied in the far-right party Alternative for Germany (AfD), which entered the federal Parliament for the first time in September's election, winning 12.6% of the vote.Despite the country's history, Germany is not immune to populism and the damage it does to democracy, Steinmeier warned in March.With Merkel partly to blame for the AfD's recent success — according to some German politicians — and weakened by a poor election result and failed coalition talks, Steinmeier is the "most stable figure in German politics right now," according to Luetjen."He's the last survivor of a generation. And he might be the right Bundestag president at the right time."

EU ‘essentially the work of the Devil!’ Australian journalist erupts at ‘ludicrous’ bloc

EU emissions red tape has provoked a furious backlash on Australian television from Sky guest Greg Sheridan. The bloc has slapped a…

Europe has set a target date for when Brexit will really..

The woman, who was wearing pants and shoes, was part of the international feminist organization Feme..