Nearly a half century ago, magazines like Tiger Beat were where young girls (and their brothers) went to find out what their "fave"—short for "favorite"—was up to. There was no TMZ, no internet, no YouTube, no podcasts, no photos in your phone. The overnight success of David Cassidy, who died Tuesday at 67, was created by the same machine that had worked wonders for The Monkees, a made-for-TV band that had blasted four young, handsome unknowns into the pop stratosphere with a teen idol trifecta: a weekly prime-time TV show, a constant flow of singles and albums, and stadium concerts all over the world. David's own pre-fab band, the Partridge Family, repeated the same recipe for success — all of it covered, of course, by Tiger Beat and our several sister publications.David had showbiz in his blood, and his true desire was to become a serious actor. He'd been raised primarily by his mother, stage actress Evelyn Ward, in New Jersey. He moved to Hollywood in his teens, where he had very little face time with his father, actor Jack Cassidy, whom he idolized. When he got the "Partridge" gig, David was barely 20, and had very little life experience. He also had little or no support system when he became an overnight sensation. I watched it all happen, and later saw it all unravel, as I spent several days a week on the Partridge set, covering David and his co-stars, real-life stepmom Shirley Jones and Susan Dey.At first, David was giddy to be appearing on a prime-time television series. He was cheerful and cooperative, which made my job easier as I worked every angle to come up with stories about this shiny-haired young man. And I do mean every angle. When David got his bangs trimmed, we made it a cover story. When he gave up cigarettes, we turned it into headline news. We got his roommate to write a column about living with David. I couldn't write about why David's dog was named Hashish, because our nine-to-twelve-year-old readership didn't want to know that David enjoyed recreational drugs when he wasn't working. But we could publish page after page of him cuddling Sheesh (his public name for the pooch) and "confessing" how much he loved his young fans. 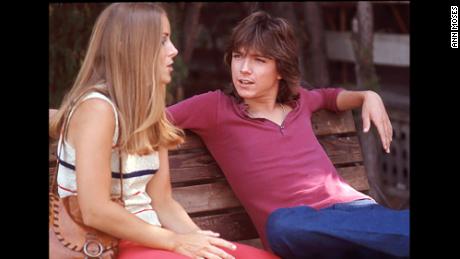 When Hashish had puppies during the show's first season, David told me he didn't know what he was going to do with them. I created a "Name David's Puppies" contest, and we gave away the pups to five lucky young ladies with a talent for naming dogs. David was very sweet to my mom, who took care of the puppies for him until they were weaned and shipped off to their new owners.A few months later, the nice young man who'd kissed my mom on the cheek in thanks for looking after his puppies was pretty much gone. Whenever I appeared on set, David began to disappear between scenes — during the times he had once joined me for interviews. I couldn't write about David's favorite snack food (dry-roasted peanuts) or his favorite color ("It depends on my mood") or how he felt about his neat new sports car if he was hiding from me all the time.I went to my boss, Tiger Beat publisher Chuck Laufer, and complained that David didn't want to talk to me about his favorite dessert (strawberry shortcake) anymore. Chuck called Jack Cassidy, and Jack talked to David, and David returned to my side, ready to discuss once more his favorite song ("The Thrill is Gone" by B.B. King) and what his fans meant to him ("Everything"). But he wasn't happy about it.Looking back, I get it. In the space of only a few months, David Cassidy's life had stopped being his own. He was either rehearsing for his stage show, filming 12 hours a day on the TV show or in the recording studio, making another record.On weekends, he'd fly all over the country, appearing in sold-out stadium shows. I couldn't write about the toll I saw all of this taking on this young man. Teen Idol Superstar David was lonely. Without the support of a loving family, his fame became a nightmare, way too much for a young person to handle on his own. Was David Cassidy a superstar because of his superb acting? Was he the greatest singer of his generation? Was he cuter than Davy Jones or Bobby Sherman or Donny Osmond? It didn't matter. He was the androgynous boy who fans adored, and it was my job to tell them what his favorite color was.During the time I knew him, David Cassidy's favorite color appeared to be blue.

US seizes $1bn in bitcoin linked to Silk Road site