And "reflection" there will be. But not just in the Kanzleramt — the Chancellery of the German capital.While talk of the demise of Angela Merkel is exaggerated, her focus is turning inward and the end of the Merkel era — one way or another — is slowly approaching. She is certainly not as strong as she once was.It is too early to speculate what will happen in Germany — if there will be a minority government or new elections.But whatever the outcome, the crisis in Germany will have implications in the rest of Europe.Some euroskeptics have made no secret of their dislike for the German Chancellor.Her decision to open the borders to about one million refugees, as well as her robust and anti-populist line on everything from public finances to foreign affairs, has made Merkel the bête noire among the far-right politicians across the continent — and beyond.But they will miss her, whenever she eventually goes.Merkel was always a pragmatist, and however difficult the likes of Viktor Orban in Hungary and Alexis Tsipras in Greece could be, she was always there with the German checkbook to bail them out. A diplomat to the core, Merkel was always willing to accept the ill-tempered tantrums of testosterone-fueled politicians with larger-than-life egos as long as this benefited the economic interests of Europe.And whatever they thought of Merkel, the euroskeptics had the luxury of a scapegoat who at the same time was willing to come to their rescue.Merkel's successor — whoever it will be — will not be in the same powerful position. Merkel was able to make unpopular decisions in Germany because of her immense strength and because everyone respected her. This luxury will not be afforded to whoever comes next.The person who succeeds Merkel will likely be tougher, less flexible and less likely to give concessions to other countries.Which is what makes those hard-Brexiteers in Britain celebrating Merkel's woes so misguided. Britain's negotiations with the European Union were at close to a standstill before Germany's coalition talks collapsed.Some British politicians — such as former Conservative leader Iain Duncan Smith — have urged Prime Minister Theresa May to play hardball with the Germans. 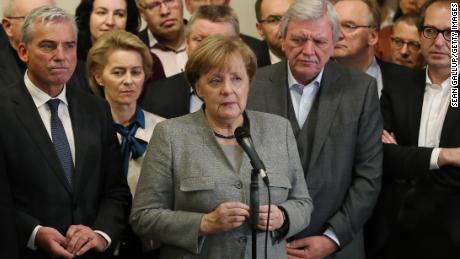 This is dangerous. A weaker Germany makes a good deal for Britain less likely.Until the election Merkel was strong enough to impose an unpopular deal on the German Parliament. She was able to — at the end of the day — resolve the Brexit problem by digging deeply into the German pockets.A weaker Bundeskanzler — whether it is Merkel or her successor — cannot impose a costly deal upon a German Bundestag.The German politicians, to speak nothing of the voters, are not willing to give the British a good deal. The reverse, if anything, is true.Many euroskeptics have regarded Merkel as a federalist with a preference for more integration. This is not an accurate description. Merkel was always a pragmatic supporter of the EU. European integration was never an article of political faith for her.All her possible successors are europhiles and favor "an ever closer union." Her possible demise will increase the probability of a leap toward a more integrated EU along the lines espoused by French President Emmanuel Macron.The euroskeptics who loved to hate Angela Merkel and everything she stood for will miss her sorely when she is gone.

Prince dies, refused to be buried with queen

The 83-year-old prince, who was hospitalized in Januarywith a lung infection after being diagnosed w..

His improbable rise to the French presidency, the near-historic parliamentary majority achieved just..