LONDON — Halfway between voting to leave the European Union and walking through the exit door, Britain’s economic policy is lost in a fog of uncertainty.

For Chancellor Philip Hammond, who delivers his budget statement Wednesday, this poses a major problem of economic credibility. With so much up in the air, what is the point of a five year forecast?

The further away from the 2016 Brexit vote Britain gets, the harder it is for economists to pinpoint its effects. Tom Pope, of independent think tank the Institute for Fiscal Studies (IFS), said last year it was possible to say what the economy might have looked like had Britain voted to remain in the EU. “That gets harder and harder the further you are from the vote,” he said. “You can’t disentangle the effect of Brexit anymore.”

So when Hammond stands at the despatch box in the House of Commons Wednesday, he won’t give new details of Brexit revisions — setting out costs directly attributable to leaving the European Union and the uncertainty it is causing — along with the rest of his policy announcements, according to officials.

This provides potentially useful cover for any tricky downward revisions which economists now expect, primarily as a result of long term productivity problems. It also clears the way for Remain-supporting Hammond to set out the optimistic vision of the U.K. economy demanded by his Brexiteer critics.

Instead the chancellor will deliver his plan for the next five years despite not knowing the cost of the divorce bill, nor how much the U.K. will continue to pay into the EU’s coffers for single market access after Brexit day.

The size and scope of the future trading relationship with Brussels is also up in the air, making any long-term forecast about the health of the U.K. economy sketchy at best.

However, there are signals showing the British government’s assumptions about the direction of travel for those who know where to look. Here are four of them.

In the last full financial year before leaving, Britain will pay £12.6 billion into the EU budget. But after March 29, 2019, when Britain is due to leave the European Union, that chunk of cash is theoretically up for grabs.

Before leaving, Britain will pay £12.6 billion into the EU budget. But after March 29, 2019, that chunk of cash is theoretically up for grabs

While not quite amounting to the discredited £350 million-a-week figure that Brexiteers boasted would be better spent on the NHS than being sent to Brussels, this would provide the chancellor with a major cash boost of £8 billion a year, or £150 million a week. That’s the equivalent of 6.5 percent of the NHS budget, according to the IFS, an economic research institute.

However, watch out for how the Office for Budget Responsibility — an independent body that comes up with spending plans for the government — allocates this money in reality.

While it does not allocate this money as flowing automatically to the EU after Brexit, neither it does not assume it will be a net saving for the Treasury. It is instead known as “possible substitute spending,” with an inbuilt assumption that it will be sent somewhere other than the Treasury’s coffers — whether that’s to Brussels or not.

This commitment — made in her Florence speech last month — amounts to around £20 billion. The EU is asking for up to another £30 billion in future EU spending — the so-called reste à liquider — plus a possible £10 billion in pension payments. 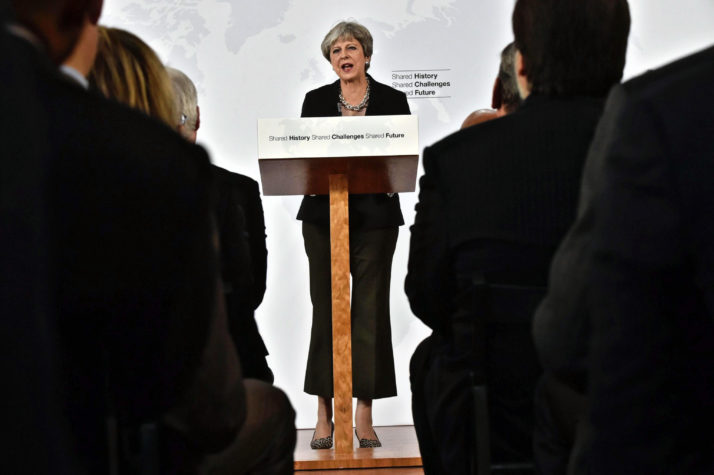 How a bill of around £60 billion will be paid is unclear — either in a one-off payment on exit day, perhaps, or over three years under EU spending rules.

While politically explosive, such an amount could easily be swallowed. Should the U.K. agree to stagger the payments over a few years it would not be wildly out of line with the already accounted for budget contributions, although this would preclude any major increase in spending on the NHS, as demanded by leading Brexiteers such as Jacob Rees-Mogg.

Government officials said there would almost certainly be no mention of a Brexit bill in the budget on Wednesday.

Any divorce bill pales into insignificance compared to the extra tax income gained from a good deal with the European Union, according to the IFS.

“A ‘divorce bill’ could quickly pay for itself” — IFS

“A ‘divorce bill’ could quickly pay for itself if, for example, the trade deal it helped deliver had even a modest positive effect on the size of the economy,” it said in a blog post Tuesday.

The OBR’s initial assessment suggested the economic effects of Brexit would cost the exchequer £15 billion per year by the early 2020s.

While the OBR will not this week attribute further economic downgrades to Brexit, it will be worth checking to see whether there has been a further erosion in the overall public finances. Whether Brexit-related or not, such an erosion would impact Britain’s long-term health and play into the debate about the U.K.’s exit package.

In the OBR’s November 2016 economic and fiscal outlook, it set out three areas where it forecast a clear impact of leaving the EU would be felt: the exchange rate, business investment and migration. All three had a negative impact on economic growth.

The depreciation of the pound would lead to inflation, hitting consumers in the pocket, the OBR said, and business investment would fall because of the ensuing uncertainty. Lower than expected migration would also hit the U.K.’s economic output, it added.

This year the assumptions behind these forecasts will no longer be highlighted as costs of Brexit — and any new impacts in all three areas will be added into the overall budget mix.

However, according to officials these assumptions will be “baked in” to the forecast, buried in the government’s budget numbers and continuing to be felt even as the original cause of the problem fades from view.

The French economy and finance minister has said that France is moving toward a period of rebalancin..

The Square Mile has weathered a turbulent year, and as 2017 comes to a close, business leaders have ..

German firms will reconsider their trade links to the ..

Leading activist investor Sir Christopher Hohn has called for the resignation of the chairman of the..