But the 56-year-old no longer takes such strolls. Now, when he goes out with his dog at night, he stays in the line of sight of the police who blanket the area."Everyone is on edge," he said. "We are trying to maintain as normal of life as possible. We don't want to live in the shadows."In the last month, four seemingly unconnected people have been shot and killed in Seminole Heights not far from Haynes' home. The victims are separated by age, race and occupation, and each was killed — but not robbed — while walking alone at night within a half-mile area, police said.Officials have said the killings are connected in their methodology, leading to fears that a serial killer is on the loose. Nobody has been arrested for the killings. Tampa Police Chief Brian Dugan released blurry video in late October of a "person of interest" wearing a hood casually walking down a street near one of the killings. On Wednesday, Dugan released new video showing a similar-looking person with the same gait who was present near Tuesday's killing of 60-year-old Ronald Felton.The person in the video, he said, is now a suspect. "Somebody has to know who this person is," Dugan said. "We don't need speculation, we don't need profiles. We need names."Based on a witness statement, Dugan described the suspect as a black male between 6 feet and 6 feet 2 inches with a thin build and a light complexion. He was wearing all black and a black baseball cap and armed with a large black pistol, police said. Police said they believe the suspect also lives in the same neighborhood as the shootings and is familiar with the area.Police have received 2,300 tips in the case so far, he said, including 450 tips on Tuesday.

In the past month, police have swarmed the Seminole Heights neighborhood. Dugan and other Tampa officials have advised residents not to go outside alone, to be alert, to keep porch lights on at night and to set up cameras that might capture suspicious activity.Haynes said he has kept his lights on at night and noted that streetlights have been on as well. Police drive by every 15 to 20 minutes, and he also has seen officers on bicycles and horseback."We all appreciate the heavy police coverage," he said. "This is unusual for this community. This is a low-crime area."Lindsay Ingraham, 35, said she no longer goes for morning runs and has her boyfriend meet her at her car when she returns home every evening. "The police presence … it's like nothing I've ever seen before," she said, sipping coffee on her front porch. Indeed, three parked police vehicles were in view from her porch, and at least four more passed by during a brief interview.Ingraham, who bought her Seminole Heights home in 2013, said the possible serial killer preying on her neighborhood has even cast a pall upon Thanksgiving. She is hosting the feast for the first time next week, but she has already had three cancellations due to the killings. "I hope I can convince them to change their minds," she said. 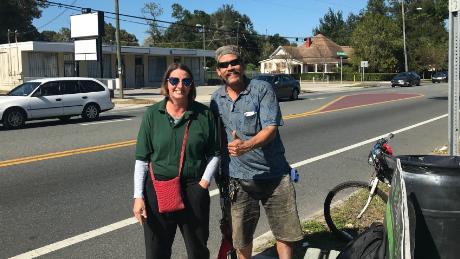 Shannon Lee, 47, works until 11 p.m., so her boyfriend walks her from the bus stop to their home in the evenings. On this Thursday, Lee was at the bus stop on her way to work, escorted by her friend Carlo Troche, 56. On the night Monica Hoffa was killed, Lee said she walked right by her and didn't know it had happened. "It could have easily been me," said Lee. "That's scary to think about. My family is all freaking out."She used to not think twice about getting up in the middle of the night and going to the convenience store to buy cigarettes. But she doesn't do that anymore."It's not worth losing your life over somebody's anger, over something you have nothing to do with," said Lee. Tyqueisha Harris, 23, said she hasn't changed much about her routine in the last month, but she did drive her 16-year-old brother to high school Wednesday morning, out of an extra bit of caution.With such high stakes and so few answers, some residents have embarked on their own investigating.Reginald Pringley, 58, said he can't sleep because of the killings, so he took it upon himself to use his "criminal mind" and investigate what he thought might be the killer's steps. 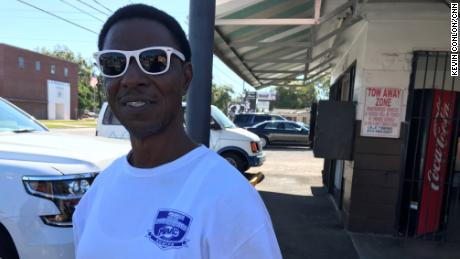 Pringley found discarded socks in an alley nearby and told police about them, hoping they might lead to a break in the case, he told CNN."I think that he ran down the alley and was changing clothes," he said.The killings have all occurred in Southeast Seminole Heights, an area made up of about 1,450 homes and businesses. Home sales have yet to be canceled or affected by the killings, according to Stan Lasater, president of the Southeast Seminole Heights Civic Association."This is still the most desirable neighborhood in Tampa," he said.

The string of killings would seem to fit the definition that the FBI's Behavioral Analysis Unit used in a 2005 publication on serial murder: "The unlawful killing of two or more victims by the same offender(s), in separate events."Benjamin Mitchell, 22, was shot and killed in front of his home October 9. Monica Hoffa, 32, was shot and killed October 11. A city employee found her body two days afterward in a vacant parking lot half a mile from where Mitchell died.Anthony Naiboa, an autistic 20-year-old who had just graduated from high school, became the third victim when he accidentally got on the wrong bus and ended up in the neighborhood by mistake, police said.Ronald Felton, 60, was shot from behind as he crossed the street on Tuesday just before 5 a.m.Tampa police and officials have resisted using the "serial killer" term because "we just don't have enough evidence," Tampa Mayor Bob Buckhorn said in October."We're not afraid of that word. If we think that that's true, we'll be happy to say it, but we've got to connect the dots," he said. 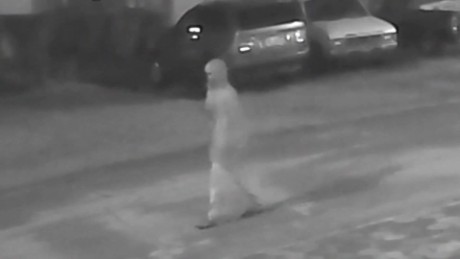 Dugan reiterated that position in a news conference on Wednesday. The videos released by police connect one person to two crime scenes, but that was the extent of their evidence at this point."We're not calling them a serial killer because we still can't say they've done all of the homicides. We're pretty convinced they've done at least two of them," Dugan said. "We have very limited evidence."Despite how they're presented in popular TV shows like "Dexter" or "Mindhunter," serial killers do not necessarily kill in bizarre rituals or out of sexual desires, according to the FBI's analysis.Dugan added that he didn't want that "serial killer" label to mislead people."I've been very specific because I don't want people to stereotype and box in their thinking," he said.Dugan said he was comfortable connecting the separate murders not because of forensic evidence, but because of their proximity, the timing of the deaths, and because each victim was alone."I'm convinced they are linked together. Whether we have all the evidence that says that, we don't have that," he said.The Tampa killings bear some similarity to killings in 2015 and 2016 in Maryville, Arizona, in which nine people were killed in separate shootings. The victims spanned all ages but all lived in the same neighborhood in west Phoenix. Police said most of the shootings occurred as victims walked down streets or stood in their yards. Aaron Juan Saucedo, 23, was arrested and charged with those shootings in May, police said.

Kevin Spacey may be charged with sexual assault in California, in the first known investigation outs..

The northeast of America is braced for a so-called “bomb cyclone” – or “bombogenesis” blizzard – as ..

Trump slams Fire And Fury as ‘work of fiction’

Donald Trump has accused the author of a highly critical new book as being a “fraud” and slammed the..

Around 100 protesters supporting the Students for Justice in Palestine (SJP) staged a walkout intend..