Britain has waded into an almighty row in the Middle East amid claims US President Donald Trump is about to “sign a war declaration” over Jerusalem. Trump is due to announce his highly-controversial decision to officially move the US embassy from the Israeli city of Tel Aviv to Jerusalem.

The move essentially declares Jerusalem the Israeli capital, and looks likely to undo decades of planning to bring peace to the region.

UK Foreign Minister Boris Johnson has urged the White House to present a proposal to revive the Middle East peace process “as a matter of priority.”

Senior administration officials said Trump will announce the decision, which they have called “a recognition of reality,” in a speech later.

Johnson said this “makes it more important than ever that the long-awaited American proposals on the Middle East peace process are now brought forward.” Arriving in Brussels for a NATO summit, Johnson insisted Britain did not support the president.

“Let’s wait and see what the president says exactly, but we view the reports that we have heard with concern, because we think that Jerusalem obviously should be part of the final settlement between the Israelis and the Palestinians, a negotiated settlement that we want to see,” he said.

Johnson set out his vision for peace in the region in October, on the 100th anniversary of the controversial Balfour Declaration.

“There needs to be a just, fair, agreed and realistic solution to the Palestinian refugee question, in line with UN Resolution 1515. In practical terms, this means that any such agreement has to be demographically compatible with two states for two peoples and a generous package of international compensation must be made available. The final determination of Jerusalem should be agreed by the parties, ensuring that the holy city is a shared capital of Israel and a Palestinian state, granting access and religious rights for all who hold it dear.” Johnson also insisted Britain has no plans to copy the US and move its own embassy. 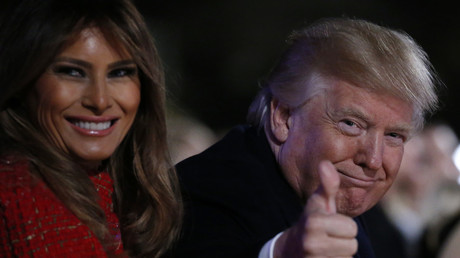 The Palestinians’ UK representative Manuel Hassassian, told the BBC the changes amounted to declaring war in the Middle East and would be the “kiss of death” to the two-state peace solution.

Officials in Israel are celebrating the apparent backing of the US, which will be the first nation to recognize Jerusalem as Israel's capital since the state was formed in 1948. The area was annexed from Jordan after the 1967 Middle East war.

Israeli control of the area, the self-claimed capital, is not recognized by world leaders who back the suggestion under the 1993 Israel-Palestinian peace accords the final status should be decided later.

An estimated 200,000 Jewish people live in what the rest of the world considers to be illegal encampments. Trump risks legitimizing the claims to Jerusalem for Israel, sparking international condemnation.

Saudi Arabia called the new policy “a flagrant provocation to Muslims,” while China warned against escalating tensions in the Middle East.

Egyptian President Abdul Fattah el-Sisi urged Trump “not to complicate the situation in the region.”

Trump vowed to pursue a peace agreement between Israelis and Palestinians. The initiative is being led by his son-in-law, Jared Kushner.

Johnson will meet with US Secretary of State Rex Tillerson on Wednesday. Israeli Prime Minister Benjamin Netanyahu has yet to comment officially.

A boy with a rare form of epilepsy might finally get the medical cannabis his family says could help..

On 29 November 2017 the Prime Minister became the first major foreign leader to visit Iraq since the..