London based Naa'imur Zakariyah Rahman, 20, who described himself in court as Pakistani British, was arrested last week and charged on Tuesday. A second man, Mohammed Aqib Imran, 21, from Birmingham, appeared in court at the same time, also charged with "the intention of committing acts of terrorism." When asked about his nationality in court, Imran said he was Bangladeshi British.According to court documents, Rahman planned to detonate an explosive device at the gates of Downing Street and then seek to gain access to No. 10 — May's official residence — "in the ensuing chaos with a view to trying to kill the Prime Minister.""The secondary attack on No. 10 was to be carried out with a suicide vest, pepper spray and a knife," the document said. Rahman had carried out a "hostile reconnaissance" of the area as part of his preparations and revealed his plan to "attack, kill and cause explosions" in several recorded conversations, according to the allegations.In a related allegation, Imran is accused of trying to obtain a fake passport in order to leave the UK and travel to Libya.On his arrest, Imran was found in possession of a short video recorded by Rahman "who was sponsoring Imran in order to assist him to enter Islamic State and fight," according to the allegations.Rahman allegedly made the video in November "with the expectation of becoming a martyr." The recording would have given Imran greater credibility with the terrorist organization, the document said. Lawyers for both Rahman and Imran entered "no indication" as the suspects' plea, meaning that the case continues as if they had pleaded "not guilty."Both suspects have been remanded in custody without bail and will next appear in court on December 20. The news of the arrests emerged just a few hours after the publication of an official security review, which said that 20 Islamist-inspired terrorist plots had been "disrupted" since October 2013, seven of them since the end of March this year.The UK terror threat from Islamist terrorists is operating "at a scale and pace we've not seen before," said Andrew Parker, director general of MI5, in a speech in October. He warned that "the challenge that we face is undoubtedly a stark one. More threat, coming at us more quickly, and sometimes harder to detect. But it is a challenge that we and our partners are rising to and are facing down." 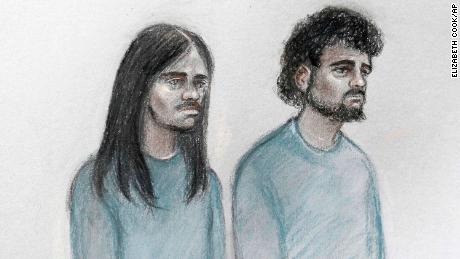 Thirty-six people have been killed in five separate terror attacks in the UK this year. Opportunities to stop the most fatal of those — a suicide bomb attack at an Ariana Grande concert in Manchester in May — were missed, according to the report by senior barrister David Anderson published Tuesday.Suicide bomber Salman Abedi, who killed 22 people, had been a "subject of interest" to British police in the months before the attack, but was not put under investigation."On two separate occasions in the months prior to the attack, intelligence was received by MI5 whose significance was not fully appreciated at the time," the report said.The report noted that while counterterrorism police and MI5 had gotten most things right, "it is conceivable that the Manchester attack in particular might have been averted had the cards fallen differently.""Policing and our colleagues in the fight against terrorism will continue to learn and improve," Metropolitan Police Commissioner Cressida Dick said in a statement Tuesday."There are currently well over 500 counterterrorism investigations, involving more than 3,000 subjects of interest — along with a growing pool of more than 20,000 individuals who have previously been the subject of terrorism investigations," the statement said."These investigations cover the full range of terrorist activity, from attack planning to activity that supports or facilitates terrorism — but a significant proportion involve potential attack-planning threats. The tempo is more intense than ever."

And “reflection” there will be. But not just in the Kanzleramt — the Chancellery of the German capit..

By Sachin Kumar | The Peninsula[hhmc]
[contfnewc]

Doha: The Qatar-France Year of Culture will incre..

Merkel made the announcement Monday in a joint news conference with Horst Seehofer, leader of the Ch..

The Metropolitan Police said that officers tested a substance in a package received at St James&#039..