Police identified the suspect allegedly behind the New York bus terminal explosion as Akayed Ullah, 27, and said the attack appears to be isolated.

Type of device: Ullah wore an "improvised low-tech explosive device attached to his body," which he intentionally detonated, Police Commissioner James O'Neill said. Being treated: Ullah is now at Bellevue Hospital, where he is being treated for lacerations and burns to his hands and abdomen, New York City Fire Department Commissioner Daniel Nigro said. Other injuries minor: Two victims at Mount Sinai West and one at Mount Sinai Queens are being treated for headaches and ringing in the ears, Nigro said. Suspect affiliations: It's unclear if Ullah is linked to any terror organization, but when asked if Ullah was connected to ISIS, O'Neill responded only that Ullah had made "statements." He did not elaborate.Location and time: The blast detonated around 7:20 a.m. ET in an underground walkway connecting two subway lines, officials said. Transit disruption: There are still disruptions on the Seventh and Eighth Avenue lines, as well as the shuttle between Grand Central Station and Times Square. Service should return to normal before evening rush hour, transit officials said. 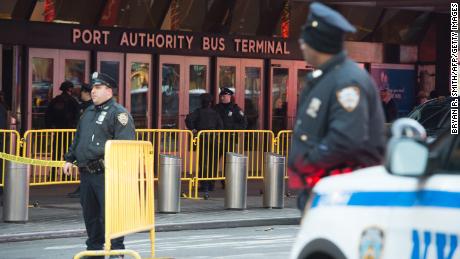 Aerial footage from the scene showed police cruisers, emergency vehicles and hundreds of police and fire personnel in the street outside the terminal."Could have been a lot worse," a federal law enforcement source told CNN.Preliminary information, according to two law enforcement sources, one local and one federal, indicates a pipe bomb may have unintentionally exploded.A man wearing a homemade device attempted to detonate it, and it either malfunctioned or did not go off the way it was supposed to, according to one NYPD source.

'Just a lot of chaos' 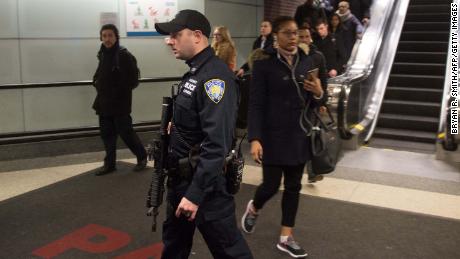 Francisco Ramirez said he was exiting a bus when he heard two blasts, even though he was wearing headphones. "From what I saw it sounded like it came from the subway, but I'm just guessing," he said. "It was two distinct explosions seconds from each other. As I was making my way toward the outside, I kept getting shoved by cops and there were cops at every entrance blocking and there was police and SWAT everywhere. "It was scary. It was just a lot of chaos but I didn't see any injuries."Marlyn Yu Sherlock was at a retail store on the main floor of the terminal when people began flooding out of the subway entrance, "screaming, running in panic," she said. "The PA system was still blaring Christmas carols," Sherlock said. "It took about four minutes before men in black cop uniforms started shooing people out of Port Authority. As I walked further away from the building, I kept asking the heavily armed cops what it was. They said 'suspicious package.'" Cuomo and de Blasio are on the scene and have been briefed by law enforcement. In a tweet, White House press secretary Sarah Sanders said President Donald Trump, too, had been briefed. The Port Authority Bus Terminal was built in 1950 and expanded in 1979. It accommodates 220,000 passenger trips a day. 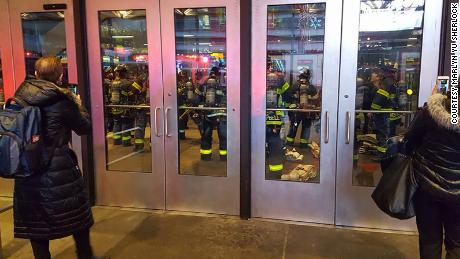 The incident comes a few weeks after a deadly terror attack in Lower Manhattan.A man was charged with killing eight people and injuring a dozen others as he drove a pickup truck down a bicycle path near the World Trade Center on Halloween. He was arrested after the truck hit a school bus, stopping it in its tracks. He exited the vehicle and an officer shot him.The suspect, Sayfullo Habibullaevic Saipov, was indicted last month on murder and terror-related charges, the US Attorney's Office for the Southern District of New York said. Saipov pleaded not guilty to 22 federal counts.It was the deadliest terror attack in New York City since the September 11, 2001 attack on the World Trade Center.

Syria: Russia warns of ‘repercussions’ to US action

Russia has warned the US of “grave repercussions” if it strikes the Syrian regime over a suspected c..

A plane carrying foreign tourists has crashed in Costa Rica, killing all 12 people on board.

Donald Trump has dared Oprah Winfrey to enter the White House race in 2020, saying he wants her to b..

WATCH: Amateur video from drivers captures the scale of the wildfires currently tearing through sout..

By approving the release of the secret memo Donald Trump has defied the intelligence community and s..