The single mother and her 6-year-old son, Caden Hammons, evacuated their home in Ventura County, headed north to Carpinteria and got pushed farther west by wind-whipped flames and a burglary. They've slept, or at least tried to, with worry on their minds and smoke in their lungs in five locations since the fire started, including their Ojai-area home."It's exhausting, emotionally exhausting," Vedder said. 'We're watching our friends' farms, land, houses be destroyed. And for us not being able to go home to safe air has been the biggest struggle."The odyssey began on Monday, December 4, when the Thomas Fire shoved the lump in anxious Ojai residents' throats into the pits of their stomachs.Walls of dangerous orange flame lit up the darkness on the edge of town. "We saw the smoke and we saw the flames and then we decided to leave," Vedder said. "Then it was mandatory an hour later for us to go, and everyone in Ojai was basically clogging up the two ways out.""Smoke, fire," Caden remembered, frowning.What does a 6-year-old think about scampering out of his home with a fire raging?"Sad, worried."So, mother and child fled to their Aunt Mimi and Uncle Greg Putnam's avocado ranch in the foothills of Carpinteria.Vedder and Caden spent a restful night in the Carpinteria home on Shepard Mesa that her grandparents once owned."We thought we were safe, but once the fire escalated overnight we decided to get a hotel room," she said.Shepard Mesa eventually was evacuated. On December 5, Vedder and Caden fled the avocado ranch for the safety of a Carpinteria hotel, miles from the attacking flames on the south side of the main freeway.They spent three nights catching up on sleep, until Vedder returned from work Friday, December 8, and found someone had stolen the important documents they grabbed and dashed with from their Ojai home. "I just felt violated," she said. Vedder filed a police report over the theft of her Social Security card, their birth certificates and other paperwork. "I was tired. I hadn't slept in days," she said. "The air quality is bad. And then to have tried to save all these things (documents) just to have them taken from our room" was the last straw, she said.So, on December 9, the Koonce family in Santa Barbara welcomed their displaced friends, this undaunted mother and son.Surely, the home of Julie Koonce, her husband, Nick, and their son C.J. would be far enough west of the Thomas Fire's wrath. C.J. gave Caden a pair of red "Star Wars" pajamas adorned with Stormtroopers and the families shared a meal highlighted by homemade pizza.Vedder and Caden shared a foldout couch, their fourth bed since the fire began, only to be awakened by mandatory evacuation alerts and warnings about the Thomas Fire burning west in the hills. 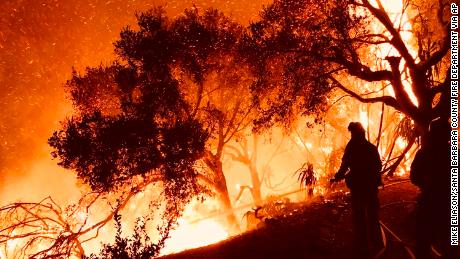 At sunrise December 10, Vedder and friends tried to brew coffee to inject some liquid caffeine into sleep-deprived, stress-ravaged bodies.But the power kept going out. Coffee finally brewed at 11 and by 6 p.m., Vedder, Caden and the extended Koonce family heeded voluntary evacuation orders and moved to a hotel farther west in Goleta, where they are now. "We just try to stay positive," Vedder said.And somehow Vedder, a 42-year-old aesthetician at La Reve Spa in Santa Barbara, has kept working.Because school is canceled, her boss let her bring well-behaved Caden to the spa, where he spent much of his time playing on the computer. Their trek has been filled with friends reaching out in many ways.Vedder plans to return to Ojai as soon as she can, when the smoke clears. She says she has broken down crying during the journey from an inferno."At nighttime is usually when — I'm missing home," Vedder said. "But we explain that our friends are safe, our house is safe and we're going to move forward. And we're just lucky that we have a place to go home."Vedder adds she's waiting for an air purifier to arrive and that will help with the unrelenting smoke.So, they wait in evacuee limbo, just two of 100,000 or so refugees from the Thomas Fire,Video of the inferno flickered on a local news report as Caden consumed six small pancakes in the "Star Wars" pajamas handed down from his friend.Outside, sepia-toned smoke hung in the air. "It makes people sick and they have to go to the doctor," Caden said. "I'm just scared now."Sitting on a couch in a hotel, the boy hugged his mom.

The post Mom and son scramble 4 times to stay out of fire's path appeared first on News Wire Now.

A riot erupted at a prison in central Ve..

75 days after Maria, this is life in St. Croix

The noise is all around him, a mix between a car engine and a really big blender. On St. Croix, an i..

The execution of a Mexican journalist at his son’s Christmas pageant was overshadowed by the murder ..

Two black men who were arrested while waiting at a Starbucks in Philadelphia have settled with the c..