If Russian natural gas exports to Italy stop, the country will have only 15 days before the emergency situation, according to La Stampa. What is the scale of European dependence on the Russian gas? Can the US replace it?

“In Italy, the share of Russian gas imports is about 37 percent. In Germany, it is slightly less, about 28 percent. German companies can really do without Russian gas for a week longer than Italy,” Petr Pushkarev, Chief Analyst at TeleTrade told RT.com.

The question was first raised in La Stampa following the fatal explosion at the Austrian gas facility on Tuesday, which severely disrupted gas supplies in Europe.

Other countries in Europe are even more dependent on Russian gas than Italy or Germany, and will last even less than Italy’s two weeks, the analyst said.

“Dependence of Slovenia, Greece, and Hungary is at a level of 41 to 45 percent. Without gas from Russia, they will face a strong energy deficit in about 10 days,” Pushkarev said.

The European Union has been working to unite gas pipelines from Europe, Asia, and Africa into the Trans-European Networks (TEN) to provide safe and secure supplies of gas to the continent, said Ivan Karyakin, investment analyst at Global FX.

The same strategy is followed by Russia’s Gazprom, which despite being a traditional supplier of pipeline gas to Europe has been developing liquefied natural gas (LNG) facilities.

Europe is divided on the issue. Russia’s allies in the EU are Austria, Hungary, Germany, and the opponents are the countries of Northern Europe, the Baltic States and some countries in the south. 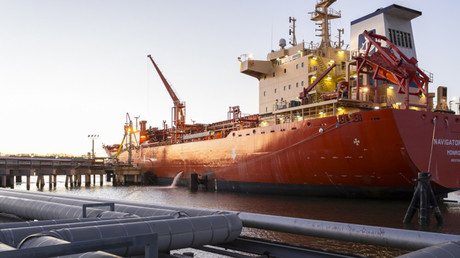 “If Gazprom implements all its pipeline projects, then the pipeline gas from Russia will firmly take its place in the energy system of Europe. Then, it will compete with LNG from the United States and Qatar, and the Russian gas has more chances to offer better prices,” Karyakin told RT.

This is why the new package of sanctions against Iran, North Korea, and Russia include sanctions against Russian gas supplies to Europe, the analyst stressed. In this case, Iran and North Korea are just a there to thwart the Russian Nord Stream 2 and other natural gas projects.

“Brussels surely understands that replacing the Russian pipeline gas with American LNG does not increase, but reduces the energy security of the EU. Most likely, it will not give up cooperation with Gazprom. But Gazprom will have to suffer, too, because of the sanctions and the US pressure. The whole struggle is ahead,” Karyakin said.

According to Pushkarev, developing LNG supplies from Qatar and the US is important for Europe, but only to have alternatives in case of an emergency like in Austria.

“LNG is expensive. It will cost consumers 50-70 percent more than pipeline gas, and it is simply not required in large volumes in the absence of technical problems. Therefore, Washington has zero chance to oust Russia from the European gas market,” Pushkarev said. This is why the US is putting pressure on Europe, he added.

Over the past year, the US has increased LNG supplies to Europe. However, it now has only six percent of European LNG imports, which doesn't take into account natural gas supplies through pipelines.

Royal Dutch Shell and BP have confirmed Russia would continue to be Europe's top gas supplier at least through 2035. The Russian share of the European gas market increased to 34 percent last year, according to Gazprom.

The post How long can Europe survive without Russian gas? appeared first on News Wire Now.

The Ink Factory’s Stephen Cornwell lost his home Tuesday due to the Thomas Fire ra..

The dollar has held steady after Donald Trump’s election blow

The dollar weakened only slightly overnight, despite Donald Trump being dealt a hefty blow in a US S..