The deaths "are all contained to the train," said Ed Troyer, the Pierce County Sheriff's Office spokesman. "It's pretty horrific."Troyer said there were "multiple fatalities" but couldn't provide a precise number.Several motorists in vehicles that were struck by the fallen train cars suffered injuries, but there were no fatalities among people in those vehicles, the sheriff's office said.

— About 77 people were transported to hospitals in Pierce and Thurston counties, officials said. Four of them suffered serious injuries, according to Cary Evans, spokesman for CHI Franciscan Health. — The National Transportation Safety Board is sending a team to investigate.– Photos from the scene show at least one train car on the road, with another dangling over it.– President Trump has been briefed on the incident.LIVEAmtrak train derails

The incident happened near the Billy Frank Jr. Nisqually National Wildlife Refuge in Dupont, about 20 miles south of Tacoma.Troyer said multiple cars and trucks were struck by the train when at least one of the derailed cars hit the highway, and that some of the injured were able to walk off the train and are receiving treatment.Patient transportation is being coordinated from the command center at St. Joseph Medical Center and the Pierce County Disaster Management Command Center. Rooms have been set up for family members, officials said. 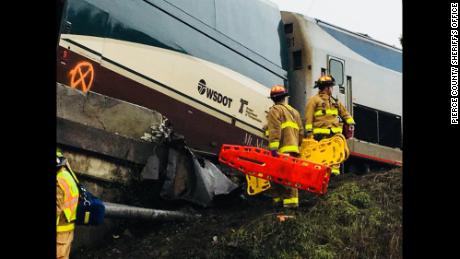 All southbound lanes of the interstate are closed due to the derailment and the sight stunned motorists heading to work. The incident took place at 7:40 a.m. near DuPont, between Tacoma and Olympia."I was traveling to work this morning along I-5 and we came to a sudden stop," Greg Mukai told CNN by phone. "We all tried to stop quickly to avoid running into each other to be honest. Once we all came to a stop I was able to look up and see, unfortunately, this scary thing of… a train hanging off of the overpass. Lots of military personnel and people ran to try to help the best they could." 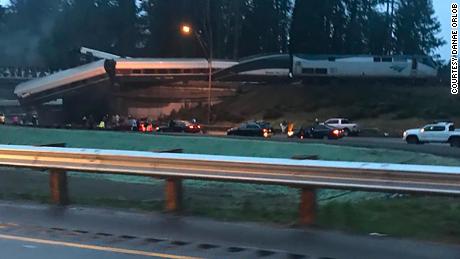 Monday was the first day of Amtrak 501's Cascades service from Seattle to Portland, a new route offered by Amtrak that began today, according to company's website.Danae Orlob told CNN there was a semi and a crushed truck underneath the train cars. 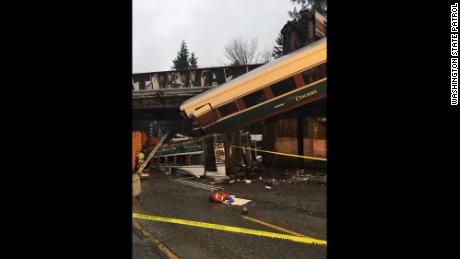 "We came around the corner and it had to have just happened… there were no police there yet. There was one link of the train off to one side and the other on the other side of the freeway. There were crushed cars underneath. There was an insane amount of fire trucks and ambulances heading towards us."President Trump has been briefed on the Amtrak incident in Washington, press secretary Sarah Sanders told CNN.Amtrak said it is aware of the incident involving the 501 train, which travels from Seattle to Portland, Oregon. According to an online schedule, the 501 train is one of Amtrak's Cascades trains, which connects "18 cities along the I-5 corridor including Seattle, Portland, Vancouver, BC, and Eugene, Oregon."Amtrak service south of Seattle is temporarily suspended. Service from Seattle to points north and east is continuing to operate, Amtrak said.The National Transportation Safety Board is sending a team from DC to Washington state to investigate the derailment, the agency's official Twitter account confirms. "NTSB is launching a go-team to investigate the Amtrak passenger train derailment in the State of Washington. Team will depart DC today. Additional information to follow when available," the tweet said. Washington Gov. Jay Inslee tweeted, "Thank you to the first responders on the scene. We're praying for everyone on board the train, and ask everyone to hold them in your thoughts."

They stand like surreal monuments in the California scrubland: prototypes of Donald Trump's pro..

Ex-CIA boss to Trump: ‘You will not destroy US’

Donald Trump has given no indication that he cares very much about what former White House officials..