With Republicans' passage of one of the most significant tax reform bills in decades, everyone is asking the same question: Will my taxes go up or down? Obviously, every tax return is different and generalities are difficult. Is a person's income from a job or investments? Are they itemizing or taking a new, much larger standard deduction? Still, for individual tax filers whose main source of income is their paycheck, some preliminary estimates can be made. Latest coverage: Congress votes on tax overhaulGenerally speaking, most filers benefit from the bill, with exceptions across the income spectrum. As a guide to the bill, it is fair to say that the higher your income the more you're likely to benefit. Filers in the $250,000 to $750,000 range generally see the greatest increase in after-tax income. Those at the very bottom of the income spectrum will benefit less. At the same time, the bill is most likely to raise taxes on some high-income filers in states with high state and local taxes. Another takeaway: Those claiming a child tax credit for dependents are much more likely to be winners in the bill. Much of the benefit to middle income earners comes from the doubling of the child tax credit and the standard deduction. The bill Congress is voting on will also make the child tax credit available to many more high-income earners. The credit also has a larger refundable portion, which will benefit some lower earners.The doubling of the standard deduction and loss or limitation of some deductions will mean far fewer filers at all income levels will itemize. Those in the lower and middle income groups who itemized instead of taking the standard deduction are less likely to benefit from the bill.The timeframe when considering the bill's impact on your paycheck makes a big difference in what you find. After 2025, many of the individual tax cuts are rolled back to current levels, so nearly everyone fares much worse. Thepieces of the bill maintained past 2025 tend to benefit high earners.It is critical when considering the complete impact of this bill to look beyond paychecks. The bill makes changes on the business side that that tend to benefit high-income households, who either own or invest in public corporations and private companies or partnerships. In addition, the bill doubles the amount of money that would be exempt from the estate tax, a benefit exclusive to the very wealthy. To see who would get a tax cut and who would see their tax bill go up, CNN turned to the Open Source Policy Center (OSPC) at The American Enterprise Institute, or AEI, a conservative-leaning Washington, DC-based think tank. The OSPC contributes to an open-source tool, called Tax Calculator, developed by economists and contributors across the partisan divide that anyone can use to better understand tax policy. Footnote: The results are grouped by demographic — not a reflection of any one tax return. The state and local taxes estimates are just that — estimates, based on IRS data. But what is revealed are the broad contours of a bill that creates clear winners and losers, especially across the income spectrum. 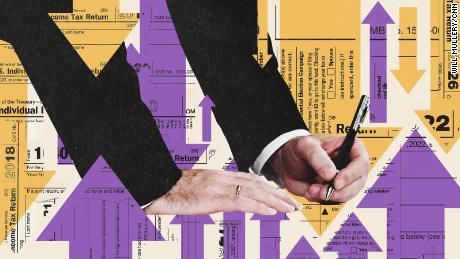 This analysis comes with some big caveats: For better or worse, we don't try to show the results of "macroeconomic effects" — things like whether workers' wages will increase because corporate taxes are cut (supporters of the bill promise they will, but others are skeptical), or how increased government debt will spur changes to interest rates. We just show, generally, what couldhappen once you go to file your taxes.State differences in the calculator above are explained by several factors. Primarily, the bill lowers the maximum deduction for state and local taxes (SALT), which vary greatly by state. States that have high SALT, like New York or New Jersey, fare worse in the bill than states like Montana or Florida, where they are much lower, or zero. In our analysis, the option to indicate that the filer has high state and local taxes can be chosen by anyone, regardless of where they live, but is most applicable to those in states with high SALT.The conference committee bill that Congress passed has key differences with past bills. See CNN's full breakdown of the differences between the bills Republicans in the chambers of Congress debated.Technical notes: Open Source Policy Center, alongside technical contributors around the country, developed Tax Calculator, a tool that anyone can use to understand how tax legislation might affect them. A former Treasury economist, Ernie Tedeschi, contributed to the development of this CNN calculator.Staff members from the Open Source Policy Center at AEI ran CNN scripts on a database constructed from the IRS Statistics of Income Public Use Tax File.Thanks to Matt Jensen, Ernie Tedeschi, Sean Wang and Greg Leiserson for their generous help and guidance.

The post This calculator shows you how new tax law affects your paycheck appeared first on News Wire Now.

Texas Teacher Accused of Sex with Student She Met at Church

US military ‘ready’ to give Trump options on Syria

The US military is ready to provide Donald Trump with options on striking Syria, the US defence secr..

One of the most controversial figures of the last 40 years in American politics will be the next pre..

The White House and Downing Street have confirmed a Sky News story that Donald Trump will visit the ..