With him comes a host of White House aides, an abundance of Secret Service agents and the ongoing controversy around the President boosting his private businesses by making frequent visits to properties that bear the Trump name.Trump's Friday arrival to Mar-A-Lago will mark the 106th day Trump has visited one of his properties as President, a fact that critics argue helps the businessman-turned-politician boost the bottom line at The Trump Organization. Trump transferred his business holdings to a trust run by his sons before taking office earlier this year, but stopped short of selling off his holdings. To date, Trump has spent 34 days at Mar-A-Lago as President, including seven weekends in January, February and March, according to a CNN analysis. Though it has been his most controversial stomping grounds, it has not been his most frequent.When the weather in South Florida turned hot and muggy over the summer, Trump ventured north to the familiar confines of his golf club in Bedminster, New Jersey. Trump spent a total of 40 days at the club, including a number of work filled days in August when Trump held meetings with cabinet officials and called world leaders.Closer to the White House, Trump has visited Trump National Golf Club in Northern Virginia 23 times and Trump International Hotel just blocks down Pennsylvania Avenue five times so far during his presidency. He spent several days at Trump Tower in New York this summer and also stopped by the Trump International Hotel Waikiki during a brief stop in Hawaii on his way to Asia in November.The White House did not respond to requests for comment for this story. 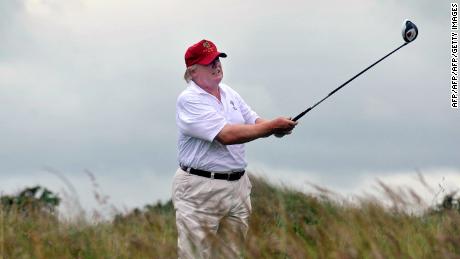 All presidents take vacations, but Trump, a celebrity before he took office, is rare in that he used that perch to slam former President Barack Obama for playing golf while running the country. Trump, as of Friday, has spent over 80 days at one of his golf courses, according to CNN's count.

The President, especially in certain Republican circles, carries a considerable cache, meaning being member of his club, a guest at his hotel or a linksman at one of his golf courses is a status symbol. But the Trump presidency has also changed the clientele at Trump's properties. Mar-A-Lago, once known for the premiere venue for fundraisers and philanthropic events, saw at least 15 organizations cancel on them during the Trump presidency, including groups like the American Red Cross, the Salvation Army and the American Cancer Society. Some of those events have been supplemented with Republican focused events, like a group known as Trumpettes USA, who held their Red, White and Blue event at the venue in January. 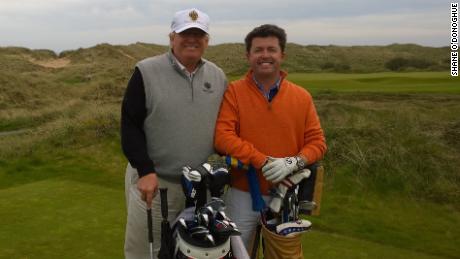 Critics of the President say the stops are a clear violation of the Emoluments Clause in the US Constitution and give each Trump business a signature competitive advantage: The presidential seal of approval. "The President's incessant exploitation of his office to promote his properties is unprecedented in American history," said Norm Eisen, the chair of the left-leaning Citizens for Responsibility and Ethics in Washington and a CNN contributor.Eisen's organization, along with other groups, has sued Trump for a log of visitors to Mar-A-Lago and over violating the Emoluments Clause with his hotel in Washington. A federal judge dismissed the suit Thursday, saying the plaintiffs lacked standing, but did not rule on the merits of their complaint. CNN Money: Judge throws out ethics case against President Trump

How much does a visit cost?

It is unclear how much each visit to Mar-A-Lago costs and estimating the cost is difficult because of fluctuations based on security protocols and protection on each trip. But a 2016 Government Accountability Office report for a four-day trip President Barack Obama took to Florida in 2013 found that total cost to the Secret Service and Coast Guard was around $3 million.Judicial Watch, a conservative watchdog organization, has estimated the the figure is less for Trump. After Trump spent a series of weekends at Mar-A-Lago earlier this year, a group of Democratic senators asked the GAO to review security and site-related travel expenses to Trump's visits. That probe is still underway, GAO spokesman Charles Young said. "The work is underway and should be completed and released sometime this spring," he said. "We don't release any info on what we are finding before the work is completed."

The trips aren't just costly to federal agencies. Local governments, whose officers are often tasked with protecting the President during his visits, saddle expenses as well. 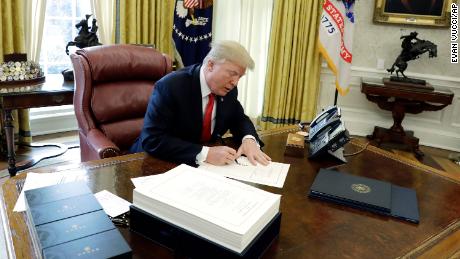 According to estimates provided to CNN by the Palm Beach County Sheriff's Office, it costs around $60,000 in overtime every day Trump spends in Florida. The cost to the sheriff's office is so sizable that earlier this year, local officials grappled with the idea of either raising taxes or cutting services to pay for Trump's trips.Those plans never came to fruition, but the Palm Beach County Commissioners did approve more funding, including 15 more deputies, for the sheriff's department earlier this year. The effort was, in part, because of Trump's visits.Dave Kerner, a Palm Beach County commissioner, said there was an understanding among all the commissioners that even in a time when budgets are tight, the county needed to offer more funding to law enforcement because of Trump's visits."There was maybe some internal frustration with it but all my colleagues supported my requested and it passed unanimously," he said.Palm Beach County was also helped this month when the Federal Emergency Management Agency awarded $3.3 million to the Palm Beach County Sheriff's Office for presidential protection.Money like that, Kerner said, helps the county immensely and he expects the county to ask for more funding as the winter, and more Trump visits, continues.

The post Trump visited his properties over 100 times this year appeared first on News Wire Now.

“If you want peace, prepare for war” – those are the words quoted by Donald Trump's next nation..

The tax reform bill, which passed on Tuesday and Wednesday, has a number of unheralded benefits — in..

The National Association of Realtors warned that the Republican tax reform bill could cause real est..