A Stockholm arbitration hearing has validated the most important points of Gazprom’s delivery contract with Ukraine, the deputy chair of Russia’s gas giant has said, and Kiev will have to pay despite claiming it has won the case.

“The main provisions of the contract were recognized as valid” by the Arbitration Institute of the Stockholm Chamber of Commerce, Gazprom Deputy Chairman Alexander Medvedev told the Rossiya 24 channel, adding that Gazprom believes that its “lawsuit was satisfied in the key contractual terms.” Ukrainian President Petro Poroshenko’s claim that Naftogaz had won the case is “at least, strange and makes one wonder if he was correctly informed on results of this arbitration,” Medvedev said.

The Swedish arbitration body ruled on the three-year dispute between Gazprom and Naftogaz Friday, both entities acknowledged. The policy of the Institute prevents it from even acknowledging that it’s mediating the case, which makes it impossible to obtain its own account of the final ruling. As a result, both energy companies have opposing takes on the outcome, both claiming victory in the case.

Medvedev said in line with the decision, Naftogaz immediately has to pay slightly over $2 billion, with a $600,000 fine added for every day of non-payment. With the Ukrainian enterprise having already paid their Russian partners $3.1 billion, the “total payment in this dispute amounted to $5.1 billion to be received by Gazprom,” he added.

Gazprom is “waiting for the contract to be fulfilled,” Medvedev said. “So far, we have received neither the money nor the fines for the delay. The penalty is growing. It has reached $1.8 million over the course of the last three days” since Friday’s decision, he said. Medvedev also pointed out that Ukraine has the right to purchase 5 billion cubic meters of gas if payment is made.

Ukraine’s claims that the Swedish arbitration body annulled the ‘take-or-pay’ provision were also misguided, Medvedev said. “This isn’t the case. Regarding the two remaining years, the amount of ‘take-or-pay’ was established at the level of 80 percent from 5 billion cubic meters of the annual volume. This is also a very important decision by the arbitration,” he said. ‘Take or pay’ means the client has to pay for a certain amount of gas agreed upon even if they don’t use all that is supplied to them, ensuring the contractual obligations are observed. 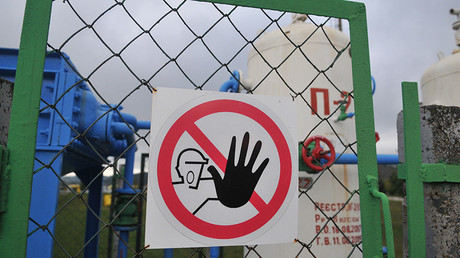 The ‘take-or-pay’ rule wasn’t implemented in full because the arbitration “apparently took into account… That the full application of ‘take-or-pay’ was impossible for either Naftogaz or for Ukraine as a whole” Medvedev said. “If it was fully implemented, this would lead to bankruptcy of not only Naftogaz, but of the entire Ukrainian economy,” he explained.
“One shouldn’t forget that the Ukrainian side’s demands for a compensation of its so-called overpayment of $14 billion were completely denied,” Gazprom’s deputy chairman manager said. He clarified that Ukraine tried to retroactively decrease the price of Russian gas, claiming it had paid too much for the resource over the past few years.

Naftogaz also hailed the ruling as a major win, estimating its positive effects at $75 billion. This sum included every penny the Ukrainian company would’ve had to pay Gazprom. It claimed further that the arbitration sanctioned the re-export of gas while voiding the linking of gas prices to oil products.

President Poroshenko described the results of the Stockholm arbitration as a “huge contribution into the energy security of our state.” He congratulated “the legal team of Naftogaz, the government, all the people of Ukraine on learning to defend its interests using European courts.”

The legal battle between Gazprom and Naftogaz in the Arbitration Institute of the Stockholm Chamber of Commerce has been rumbling on since June 2014. Most of the Russian company’s claims against Naftogaz relate to fines for insufficient withdrawal of gas by the Ukrainian side in accordance with the ‘take-or-pay’ rule. Gazprom also demanded payment of the debt and fines for gas delivered to Ukraine between May and June 2014. Naftogaz, in its motion, pushed for a retroactive change in the price of gas, the reimbursement of overpayment for unreviewed prices, and a repeal of the ban on reselling Russian gas.

The Ink Factory’s Stephen Cornwell lost his home Tuesday due to the Thomas Fire ra..

Aspall, the cider brand founded in Suffolk in 1728, has been sold to the US beer giant that owns bra..

Switzerland’s outgoing president called for a referendum to clarify the country’s relationship with ..

Ex Volkswagen executive jailed in US amid diesel scandal

Pilots and cabin crew employed in the UK by the struggling airline Norwegian Air Shuttle have been told they will not receive their April salary because the airline does not have the money to pay them.

The airline asked its 1,000 UK air crew to accept significant pay cuts or redundancy at the end of March but workers have been informed that the airline has “no readily available funds to pay any employees on this coming payday” on 25 April.

The company intends to apply for the UK governments furlough scheme to cover 80% of staff wages up to £2,500 when it opens on 20 April but does not have the funds to pay workers in the interim.

Workers have been sent a letter about the delayed payment, seen by the Guardian, which states that the airline is still waiting to receive rescue financing from the Norwegian state. “Norwegian has not been able to secure the Norwegian government support package as of yet and hence has had to take drastic measures to survive up until May,” the letter said.