Shivering residents late Tuesday received warnings and updates on government and school closings. One tweet from South Carolina transportation officials summed up how rare the weather was for the region. "Snow and freezing rain are predicted to move up SC's entire coast on Wednesday. SCDOT encourages anyone who must drive to use extreme caution. Also be extra careful around snow plows and trucks spreading sand and salt."The East's big chill turned a Pensacola, Florida, fountain into an ice sculpture and contributed to a multivehicle crash near Buffalo, New York, that officials said killed one person. Temperatures in much of the country will get even more miserable later this week. "The cold is here to stay and the worst is yet to come," CNN meteorologist Taylor Ward said.You know it's bad when even Dallas can't get above freezing. In fact in all 50 states at least one place recorded a temperature below 32 degrees on Tuesday. The temperature was 31 degrees at the Mauna Loa Observatory, which rises above the town of Waimea. On New Year's Day, temperatures across 90% of the United States didn't even get up to 32 degrees, CNN meteorologist Ivan Cabrera said.Hard freeze warnings remain in effect through Wednesday in typically balmy states, from Texas to northern Florida, the National Weather Service said. And for the rest of the week, temperatures far below normal and dangerous cold wind chills will afflict much of the central and eastern United States.At least 11 deaths, including four in Texas and five in Wisconsin, are believed linked to the cold weather.

Wednesday into Thursday, CNN forecasters believe that 'bombogenesis' will occur off the East Coast. This is a popular meteorological term that describes an area of low pressure in the mid-latitudes that drops more than 24 millibars, which are metric units of pressure, in 24 hours — creating what is known as a "bomb cyclone." When bombogenesis happens, the low-pressure systems can create hurricane-force winds. Even though they are not technically hurricanes, many will call this a "winter hurricane."Most of the forecast models keep this low-pressure system offshore enough that the most substantial snow and strongest winds will remain out at sea, with the exception of New England, where 6-12 inches of snow could fall on Thursday, with winds gusting at 40 to 60 miles per hour.The bombogenesis will help usher in another round of blustery single-digit temperatures to the northeast, dipping some temperatures. So, exactly how cold is it? It's so cold that:

So much for that Florida vacation to escape the cold. Several water parks in Orlando are closed because of the extreme temperatures, CNN affiliate Spectrum News 13 reported. On the Florida Panhandle, Panama City's high temperature Tuesday was 44 degrees, a few degrees lower than in Anchorage, Alaska. The frigid temperatures in Floridacould endanger crops such as citrus, peppers and strawberries, Florida Department of Agriculture spokesman Aaron Keller said. "The further south you go, the less cold tolerant the crops get," Keller said. "If the cold weather predictions go below Orlando, it could be a problem." In Pensacola, the weather froze the top of an above-ground pool. "My newest daughter started to cry saying that their pool was gone!" Alex Vieira told CNN. Natalie Kirkland, also of Pensacola, said she was so shocked to see the frozen fountain that she asked her husband to pull over and snap a photo.

Snow could fall in the Southeast

In Charleston, South Carolina, "It could be snowing on the beach in the next couple of days," Cabrera said. The Southeast will stay 10 to 15 degrees below average temperatures through the weekend, Ward said. Delta is offering travel waivers for those flying to and from 14 cities in the Southeast, the airline said. The forecast calls for 1 to 2 inches of snow and sleet in Charleston and Savannah, Georgia, through Wednesday, Ward said. Gov. Nathan Deal issued a state of emergency Tuesday for 28 Georgia counties in the coastal region ahead of the storm.Track the snow's path here.

Schools are closing in several states 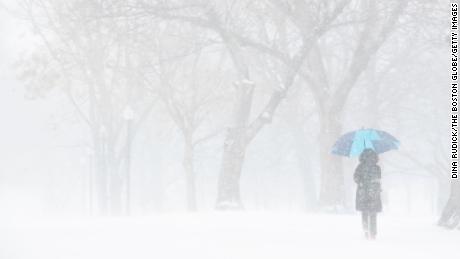 Indianapolis Public Schools and Cincinnati Public Schools canceled classes for Tuesday, sparing kids from waiting for the school bus in subfreezing conditions. But by the end of the week, temperatures will be near zero again in the Great Lakes region, CNN meteorologist Monica Garrett said. In West Virginia, the Wirt County school district had to close because of a water main burst, Superintendent Mary Jane Pope-Albin said.

Too cold for penguins in Calgary

The frigid temperature at the Calgary Zoo in Canada was too brutal for king penguins, a subantarctic species that usually strut their stuff outside this time of the year.Zoo employees brought the penguins inside Monday when the temperature dropped to -13 degrees Fahrenheit (-25 degrees Celsius), according to Dr. Malu Celli, Calgary Zoo's curator. It's not that the animals didn't like the cold. "If I opened the doors, they would come out," Celli said. "They enjoy being out, but we just like to look out for their welfare."And at least one member of the flock needed extra care from the cold; the female chick turned 5 months old.By Tuesday morning, the weather had warmed up to 34 degrees Fahrenheit (1 degree Celsius), and the penguins were back outside. But Celli warned that if the temperature climbs higher, to 50 degrees Fahrenheit (10 degrees Celsius), the penguins would have to go back inside — to cool down.

New York and Boston will drop to about 0 degrees

Get ready, New York City. Your temperatures will keep plunging through the week. On Friday and Saturday, the "high" temperatures are 14 and 10. Your low temperatures on both days will be 2 degrees. Boston is expected to freeze below 0 degrees on Saturday, Ward said.In these conditions, it's easy to succumb to hypothermia.And just a few minutes outside with uncovered skin can lead to frostbite, the National Weather Service said. If you suspect you have frostbite, go indoors immediately — but don't make some common mistakes. "Do not use hot water or radiant heat such as a fireplace since affected areas can be easily burned," the weather service said. "Seek medical attention for severe frostbite.

Venezuela says it foiled attempt to overthrow Maduro backed by US, Colombia

Venezuela's government said it foiled a marine incursion on Sun..

Dead woman to ‘give evidence’ at own murder trial

A judge has ruled that a woman who was doused in petrol and set alight will be heard at her former b..