A consultant doctor has likened the state of the National Health Service (NHS) to ‘Third World conditions.’ Dr Richard Fawcett took to social media to apologize for the current severe overcrowding on emergency wards.

At least 21 NHS trusts issued social media alerts on New Year’s Day urging the public to stay away from Accident and Emergency (A&E). Patients were urged to steer clear of critical care services, and to come to hospital only with life-threatening conditions.

In an unprecedented move on Tuesday, NHS medical director Sir Bruce Keogh ordered the cancellation of all non-urgent surgery until at least February. It will see up to 50,000 routine operations axed.

Hospital bosses have warned that the NHS is facing the worst winter crisis in 30 years, as some patients experience 12-hour waits thanks to a spike in winter ‘flu.

Some ambulance services resorted to pleading with relatives of the infirm to transport them to hospital themselves, in order to ease the demand placed upon paramedics.

Dr Fawcett went on Twitter to apologize after the NHS had a Tuesday from hell. The A&E consultant called the overcrowding at his place of work, the Royal Stoke University Hospital, heartbreaking.

“As an A&E consultant… I personally apologize to the people of Stoke for the Third World conditions of the department due to overcrowding,” he said. “It breaks my heart to see so many frail and elderly patients on the corridor for hours and hours.”

One patient took to social media to air his grievances, claiming he spent an “undignified” 18 hours on a trolley waiting for a hospital bed.

Dr Fawcett isn’t the only one left stunned by the severe hospital bed shortage. Dr Adrian Boyle of The Royal College of Emergency Medicine said the situation could lead to “avoidable deaths” and that “everybody is struggling at the moment.”

According to Dr Nick Scriven from the Society for Acute Medicine, the problem “is as bad as I’ve ever known.”

The chief executive of Mid Cheshire Hospitals, Tracy Bullock, echoed Dr Scriven, tweeting that she had “never seen anything like this.” Chief executive of Warrington and Halton Hospitals Mel Pickup said the overcrowding and pressures currently faced by hospital staff were the worst in 30 years. 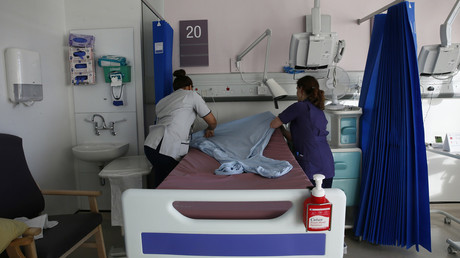 The mass winter shortage comes only months after the junior doctors strike, with medics warning that A&E departments would struggle under additional pressure.

“Patients and staff deserve better than a Health Secretary doing a ‘Grayling,’ going to ground and refusing to explain the appalling downturn in standards of care this winter,” Madders told the Manchester Evening News.

“Instead of running scared, Jeremy Hunt must answer for his party’s sustained underfunding of our NHS which has already caused such misery right across the country. After five years in the job, he should be taking responsibility, not fleeing the scene.”

Man dies in the street after catching fire

Emergency services were called to the scene in Thanet Road (Picture: Google)
A man died in the middl..

‘We aren’t slaves’, 100 migrant workers protest arrest of their boss

The teenager claims the 35-year-old told her he had split from his long-term partner – a 54-year-old..