Britain could be backed into a corner and forced to take on more migrants and refugees – while paying millions of pounds to France – as French President Emmanuel Macron seeks to extend his influence in the European Union.

The young French leader is rumored to be plotting an offer for UK Prime Minister Theresa May which would rid northern France of its migration problem, and see a new border force area funded with British pounds.

Given the growing animosity towards Britain as Brexit looms, and Macron’s popularity, Downing Street may have no choice but to accept.

And Macron has a trump card to play – if May agrees, he will offer French approval for a post-Brexit trade agreement.

Calais is currently full of migrants, with families, children, young men, and shell-shocked adults from across the Middle East and Africa living outside, while living off donations from charities and individuals.

The streets of Paris are much the same, as refugees and migrants hunt for work and new lives across the continent. Many attempting to reach the UK have told of French police brutality as tents are destroyed, dogs unleashed on teenagers, and men beaten.

Since the Calais ‘Jungle’ – home to thousands of refugees at the height of the crisis – was destroyed, French authorities have insisted that no more migrants would come. Despite this, around 100 arrive every week with the hope of breaking into a Britain-bound truck.

Under a new deal, Britain would be asked to legally accept many more migrants and fund a border crossing refurbishment under the Le Touquet accord, which puts Britain’s border in France and France’s at Dover in Kent.

A French official told Reuters: “We’re still negotiating. There is back and forth. Nothing is locked in yet. The British have shaken on nothing but there’s a lot of pressure on them.”

“Our understanding is that they will pay more. The question is how much and for what.

“We have let them know of our needs and a figure, we’re talking tens of millions of euros.”

Le Touquet could be scrapped if no deal is reached between the two nations.

Macron will visit Calais on Tuesday before heading to Britain to meet Mrs. May at military base Sandhurst on Thursday.

Interior Minister Gérard Collomb insisted Britain should pledge to take in migrants and increase its funding for border security in Calais.

Mr. Collomb told Le Parisien newspaper he wanted Britain “to take responsibility for a certain number of costs and for a greater number of people by virtue of the reception of refugees and lone children.”

Currently, around 1,000 migrants are living around Calais and Dunkirk. In 2016, more than 750 child migrants were brought to Britain from France. 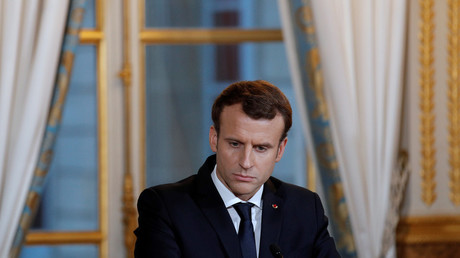 Insiders say May could offer the cash, but is unlikely to budge on the migrant issue over fears it will be a deeply unpopular move. Over the last three years, British taxpayers have given €140 million ($171.8 million) to pay for the border.

During his fist months as French president, leader of the centrist La République en Marche party Macron has repeatedly waded in on international debates, undermined other European nations, pushed French politicians towards the EU agenda, and cozied up to US President Donald Trump.

Macron was hoping to be the link between the US president and the EU, turning his attention to the Joint Comprehensive Plan of Action (JCPOA) which the US has threatened to pull out of. The JCPOA forced Iran to decelerate its nuclear program, but the White House’s action has prompted outrage. Macron is wading in, as he did over the Libya migration row, and is attempting to act as peacemaker.

Although there are no fractions within his own party, he is gaining power, popularity, and influence in the EU, which may result in further pressure on May to give in to his demands.

A spokesman for the British Home Office (interior ministry) said: “We work closely with the French authorities at all levels to reduce migrant pressures and target criminal gangs involved in people trafficking, both in northern France and further afield.”

Plans under consideration include:

Ensuring that licensed dog breeders must show puppies alongside ..

Police are hunting a tractor driver who ploughed through a row of parked cars ripping the side off o..

Serious data errors have led to invasive investigations into i..

An RAF engineer has died after a Red Arrows jet crashed at RAF Valley in Anglesey.

The pilot of the..