Victims of prolific Black cab rapist John Worboys are petitioning to have him kept behind bars. They want to know why the parole board released him so they can challenge the decision.

Warboys – who is believed to have sexually assaulted over 100 women – was convicted of 19 offences in 2009. The 60-year-old was ordered to serve at least eight years in jail, and was given an indeterminate sentence for public protection (IPP), which meant that he could be kept in prison indefinitely so long as he was deemed to be a danger to the public.

In November, the Parole Board approved Worboys’ release in a secretive hearing that outlined “stringent” conditions such as having to report to probation staff every week. Worboys, who offered his victims champagne laced with drugs under the guise of a big casino/lottery win prior to assaulting them, is banned from contacting any of his past victims.

Now, one of Worboys’ earliest known victims and his 75th victim want answers. The Centre for Women’s Justice is fundraising to mount a legal challenge on behalf of the two women, known respectively as DSD and NBV for privacy reasons, to ensure Worboys remains behind bars.

According to the Centre for Women’s Justice, neither of the women was consulted during the parole process. Both victims found out about Worboys’ approved release through the media.

NBV said: “I can’t watch the news or read the papers. My heart freezes when I hear his name.

“Seeing his face makes me feel unwell. He’s ruining my life all over again.” 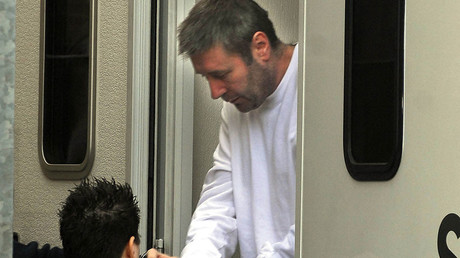 DSD said she has been in a state of “complete shock and panic” since hearing the news. “In 2003 when I reported to them I had been raped I was told, ‘a black cab driver just wouldn’t do it,’” she said.

“I said at the time if they didn’t find him he would do it again. Never in my wildest dreams did I imagine we would go on to do it again another 100 times that we know of. Unfortunately, I do not share their confidence and I am convinced he will reoffend.

“How can a prolific sex offender be rehabilitated in a short space of time when he has never admitted to his guilt or shown any remorse,” DSD added.

Home Affairs Select Committee chairwoman Yvette Cooper has previously called for the Parole Board to publish its reasons for allowing Worboys’ release.

Cooper said Worboys’ crimes were “the most appalling and vile” and there were “serious questions” over the decision to release him. She also said she was “shocked” by the decision and called for scrutiny of the board’s decision before the violent and dangerous sex attacker is let out of prison.

Director of the Centre for Women’s Justice and solicitor Harriet Wistrich said: “This will be an unprecedented legal challenge. Where a decision appears to be so irrational, as it does in this case given all the known facts, there is an arguable basis to challenge the rules preventing publication of reasons.

“If we get access to the reasons then we can explore grounds for challenging a decision which is so insulting and horrific for all the victims concerned.”

Some of the 2,000 teddy bears left as tributes to children and others killed (Picture: PA)
Almost 2,..

Police have contacted Russian exiles in the UK to discuss their safety following the suspected murde..

“In advance of the Gothenburg Social Summit, Prime Minister The..