Holly Willoughby and Phillip Schofield were forced to apologise to viewers live on Wednesday’s edition of This Morning after many were left fuming over a HUGE problem.

The programme was hit by sound issues which made it difficult for those watching in certain areas of the country to hear what was being said, causing many to vent about it on social media.

Phillip, 55, explained, “I’ve got to say, if you’re watching in the North East, the North West, and the South West, apparently we’ve just been told that there are some sound issues on our transmission today.

“Not everywhere, and it is intermittent, so we’re working on it.”

Holly, 36, then pointed out, “Which means the people we’ve apologised to can’t hear us.”

Ah yes, bit of a snag that!

Phillip jokingly mouthed to the screen in response, making Holly giggle before she added, “Sorry!” 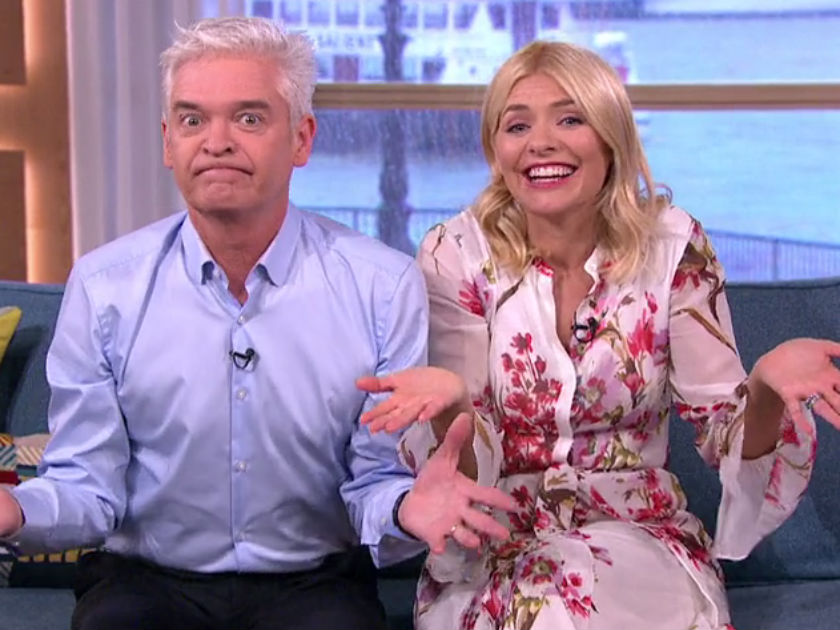 “We’re not obviously working on it, we’re sitting here, but someone’s working on it!” Phil reassured viewers.

It comes after many of those watching the programme in the affected areas spoke of their anger about it on Twitter.

‘PLEASE SORT THE SOUND OUT! It’s driving us mad #ThisMorning,’ one viewer wrote, whilst another posted: ‘#ThisMorning This sound problem is really spoiling todays programme’

And one added: ‘oh my #ThisMorning the sound issues are really annoying!’

The problems came during an exciting morning for Holly and Phil as they prepared for a royal visit to the studio.

Princes Charles and Camilla, Duchess of Cornwall were given a tour of the set on Wednesday to mark This Morning’s 30th anniversary and the couple even sat down for a chat with the presenters.

The segment didn’t go out live though and will instead air on Thursday’s show – so let’s hope there aren’t any further sound issues!

From our sister site, CelebsNow. Written by Anna Francis.

The post Holly Willoughby and Phillip Schofield forced to apologise as This Morning viewers complain about THIS ‘spoiling’ show appeared first on Woman Magazine.

The year 2020 has been transformative for how society sees fatherhood, and could produce the most profound shift in caring…

On Thursday Prince Harry and Meghan Markle undertook their third royal engagement as a couple – on a..

Is this what Spencer Matthews and Vogue Williams will call their baby after she mistakenly reveals the sex?

Spencer Matthews and Vogue Williams moved in together in July and got engaged in February. And just ..