The incident took place on Wednesday in via Livio Andronico, in Rome's Balduina district, just before 6 p.m. local time, according to Italian firefighters who were called to the scene. "The road had sunk for about 10 meters, dragging parked vehicles with it," firefighters said in a statement. About 22 families were evacuated from the surrounding buildings. No injuries have been reported. As of Thursday morning, firefighters were still carrying out security and stability checks on the scene with help of technicians. The sinkhole appeared near a building site where construction workers are erecting residential buildings, according to public broadcaster RAI News. 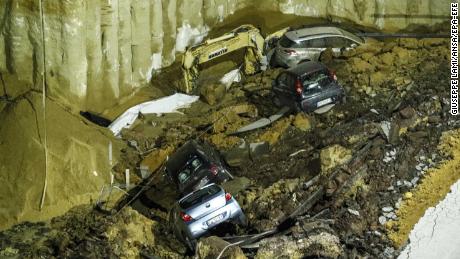 Some of the residents said they had complained to authorities about cracks in the roads. Lawyer Giancarlo De Capraris told La Repubblica newspaper: "In the last three months I filed a complaint to Carabinieri (national police) and firefighters. Everything remained unheeded. I flagged the cracks on the road surface that became deeper every day and the continuous passage of heavy vehicles. This was a disaster waiting to happen."One resident told RAI News she felt the floor of the house shaking in the past few days. Rome Mayor Virginia Raggi told Italian news agency ANSA: "Those responsible will pay."

Former Catalan President Carles Puigdemont celebrated the results from Brussels where he's been..

The trial of a sailing coach accused of raping a child has opened in Athens, as Greece’s #MeToo movement finally…