In the latest turn in the controversy surrounding Poland's new Holocaust law Jaroslaw Sellim said he supported the call, a move which could trigger yet more tension with Israel and the country's own Jewish community.Sellim says that the story of the estimated 1.9 million non-Jewish Poles who were murdered by the Nazi regime has not been well documented enough in current museums."I think that the story of the fate of the Poles during World War Two, in the first phase — the destruction of our country by the Nazis and Soviets — and the second phase, when our country was under total occupation — deserves to be told and that the world should see this horrific loss," he told Poland's Radio One."It is enough to read the official German documents from the time and Hitler's famous book to know that after the Jews, who Hitler wanted to completely annihilate from Europe, the second phase of his plan included the Slavs and especially Poles."The plans were clear. First, eliminate the Polish elites which started in the first weeks and days of the war, and then to turn Poland into a country of undereducated slaves for the Nazis to serve as a nation of physical laborers to serve their masters."I believe that previously we lost the chance to tell this story in the current Museum of World War Two in Poland the current Museum doesn't fulfill this aim."Sellim's comments came in a response to a suggestion made by writer and academic Marek Kochan, for what he had called a 'Polocaust' museum, to be built in at article for the Polish daily newspaper Rzeczpospolita.While there is no indication that such a museum will be built, Sellim believes it if were, it would provide education for those he says are "very ignorant" of the suffering of the Poles."The situation that we are in today, this hard unnecessary discussion, which is hurtful mainly for the victims from both sides, the most important Jewish and Polish victims," he added."It is unfortunate for both Jews and Poles. And today we should invite guests and journalists from abroad who seem to be very ignorant on the matter to a Polish museum, where the whole story would be told, and a place like this doesn't exist where we can invite people at the moment."

While there is a consensus among historians that certain Polish individuals and groups did collaborate with the Nazi occupiers, recent Polish governments have sought to challenge that narrative.The new law makes it illegal to accuse the Polish nation of complicity in crimes committed by Nazi Germany, including the Holocaust, It also prohibits terms such as "Polish death camps" in relation to Auschwitz and other such camps located in Nazi-occupied Poland. Violations would be punished by a fine or a jail sentence of up to three years.Read: Swastikas drawn on Polish embassy in IsraelSellim's comments are unlikely to reassure Poland's Jewish organizations, which say that the new law has led to a "growing wave of intolerance, xenophobia, and anti-Semitism," leaving many within the community feeling unsafe.On Tuesday, the country's chief rabbi, Michael Schudrich, told CNN that the fallout from the new law has been so fierce it has left many members of the Jewish community wondering if they are still welcome in Poland.Schudrich said the open letter was not a political move but more of an opportunity to show how the community is feeling."This is one of the most devastating effects of the past few weeks," Schudrich said.'It is devastating that such questions are asked and speaks to the fragility of the situation. It's not just the new law but the tone of the discussion with almost no reaction from leadership to that tone. A deafening silence by the leadership." 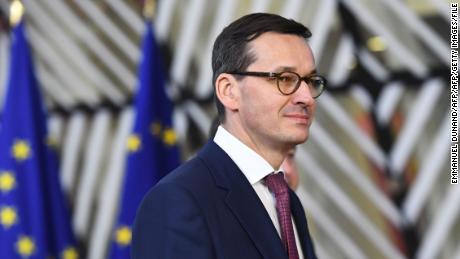 During the Holocaust, 30,000 to 35,000 Polish Jews were saved with the help of non-Jewish Polish citizens, according to Yad Vashem, the World Holocaust Remembrance Center in Jerusalem.Yad Vashem has honored more Poles as Righteous Among the Nations — non-Jews who helped Jews during the Holocaust — than those of any other country, but Israel has accused Poland of attempting to rewrite history with the new law.Tensions reached a new level on Saturday Polish Prime Minister Mateusz Morawiecki caused outrage at a security conference in Germany with comments that Jews were among the perpetrators of the Holocaust.A Polish government representative sought to clarity Morawiecki's remarks, insisting they were not "intended to deny the Holocaust, or charge the Jewish victims of the Holocaust with responsibility for what was a Nazi Germany-perpetrated genocide."Morawiecki's comments sparked fury in Israel, with Prime Minister Benjamin Netanyahu phoning his Polish counterpart to register his disgust.They also unnerved many Jews in Poland, where an estimated 10% of its 3.5 million Jews survived the Holocaust.Opinion: Poland's Holocaust law should terrify youMany of those who survived and their family members were forced to leave in 1968 in the midst of an "anti-Zionist" campaign in which the communist government blamed the Jewish community for economic problems. Many lost their jobs, were attacked in the press and had their citizenship revoked, losing the right ever to return to Poland.It was only until 1989 and the fall of communism that Polish Jews were allowed to return home.

Is Germany ready to kick the diesel habit?

Germany's top court has paved the way for major ci..

France’s interior minister has described images of police breaking up a refugee camp in central Paris, chasing people down streets and attacking…

And “reflection” there will be. But not just in the Kanzleramt — the Chancellery of the German capit..