Linda Robson admitted on Loose Women this week that a cruel comment from an internet troll has left her wondering if she needs to get plastic surgery.

The topic of plastic surgery trends came up and Linda admitted that she has her own insecurities. “I’ve always had a thing about my neck,” she told the panel.

She mentioned that it is something her mother points out to her. “You looked lovely on telly today but your neck…”

The insecurities left her trying to cover up her neck at all times by wearing scarves.

Recently, she had the horrible experience of someone leaving a nasty comment about her neck on Instagram.

“I posted something on Instagram, a picture of me after a workout, and someone said ‘Your neck looks like a vagina’ and I got so upset I rang somewhere in Harley Street and asked about having a neck lift.” 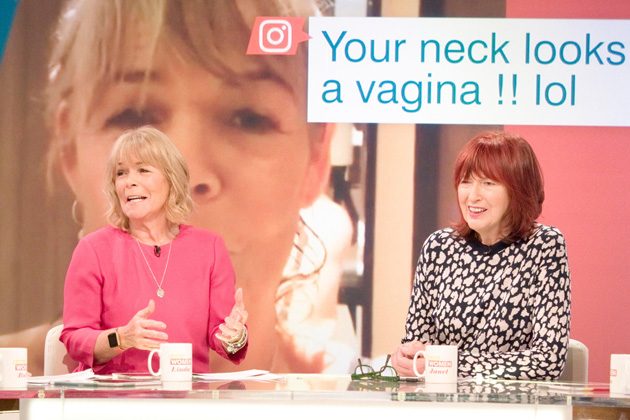 On discovering that the procedure would take two weeks to heal, and would involve her having to be anaesthetised, Linda wasn’t so sure she wanted to go ahead. She said the idea of anaesthetic “frightened the life” out of her.

The idea of a non-surgical neck lift, involving the skin being taped behind her neck, came up, and the Loose Women all encouraged her to try it – Janet even mentioned that Jane Seymour had it done last time she was on!

When she returned, the women all remarked on how different she looked, and Linda herself joked, “I’m going to insist on this on every show!” 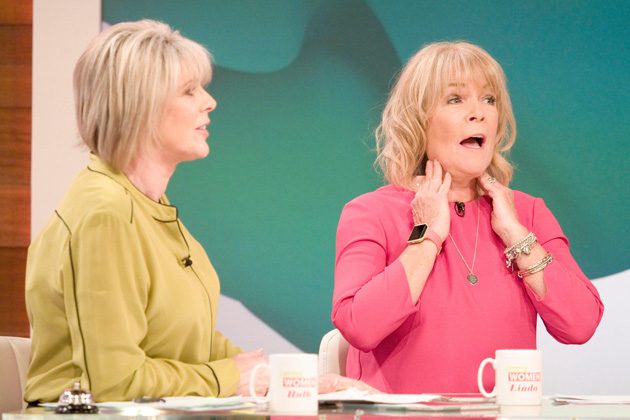 She noted that the tape didn’t feel as strange as she would have thought,

Ruth decided to open it up to the viewers to vote: should Linda get a neck lift, or should she stay as she is? 63 percent voted for her not going under the knife.

We agree completely – Linda’s lovely as she is!