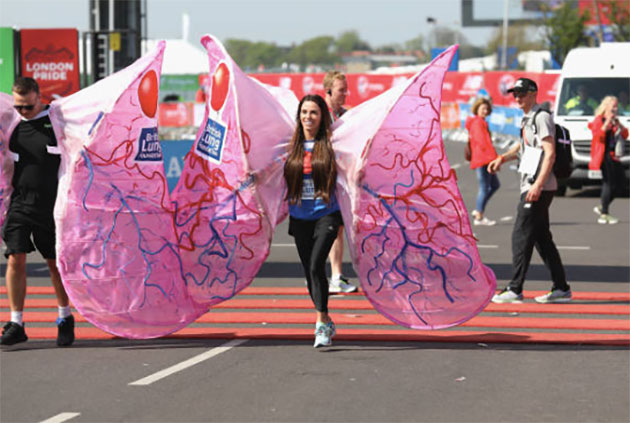 Chances are that if youve been watching the London marathon, you wouldnt have missed Katie Price. Shes not one to shy away from outrageous outfits, and today was no exception – as the TV star embarked on the 26.2 mile run dressed as a giant pair of lungs.

But sadly her elaborate outfit, as well as a painful knee injury, meant she was unable to finish the race, and is thought to have quit somewhere between the 10k – 15k mark.

One fan claimed they spotted her in a restaurant near where her tracker stopped in Poplar.

Ive come for afternoon tea with @ sophieannelane and both Joe Wicks and Katie Price are in the restaurant and its v bizarre, the fan tweeted.

Katie Price is supposed to be doing a marathon lol not having tea, another added.

A policeman was later spotted sporting Katies giant lungs costume as he cycled towards the finish line.

Katie told fans on social media: I did train for the run ,tried my best in a heavy outfit and if my mummy is proud thats what matters to me

Katie, 39, was running the race for the British Lung Foundation, following her mums diagnosis with a terminal lung condition.

Katie has previously admitted that she hadnt not done any training in preparation for the event, as she wanted to conserve her energy for the big day.

She told The Daily Mirror before the race: If I collapse, I better f***ing get up again.

But even if I end up having to crawl, I will get over that line. Whatever has gone on in my life this year, Ill put that aside on the day.

Whether she completed the race or now, Amy couldnt be prouder of Katie.

Amy told the Sun Online: I am so proud of Katie. The last few months have been a rollercoaster ride for my family.

The main thing is that we raise awareness of what is a much-neglected health area, so the people with the power to do something take notice and act.

I have a terminal lung condition that took far too long to be diagnosed.

A national plan for lung disease will help patients get the right diagnosis and early access to the right treatment and care.

Everyone who runs the London Marathon does it for their own personal reasons and the journey theyve been on.

It means something to everyone. And for Kate its about me.

The post Katie Price QUITS the London Marathon – and fans spot her in a nearby cafe appeared first on Woman Magazine.

The president of the European Union's ERC scientific research council has resigned after three ..

Has Susanna Reid got a secret boyfriend that Piers Morgan doesnt know about?