Just two years after they decided to give their relationship another go, Corries Alan Halsall and Lucy-Jo Hudson have split after nine years of marriage. 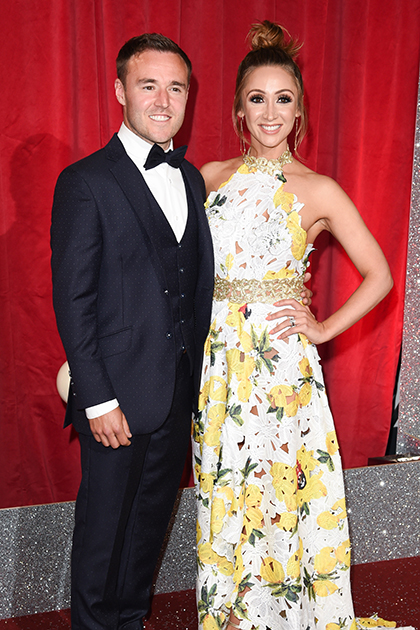 According to a source close to the soap-star couple – who met on the cobbles in 2002 – have been living apart for a while, after building work on their five-bedroom house put their relationship under strain.

One look at Instagram is a tell-tale sign that things havent been right for a while as Lucy-Jo last featured on Alans Instagram in February 2017. She last uploaded a picture of Alan in October 2017.

Alan – who plays Tyrone in the hit soap – has been joking that hes going through a midlife crisis, after splashing £35,000 on a swanky new car.

“He was referring to Lucy as his ex-wife and joking about having a mid-life crisis,” the insider explained. “He seemed in pretty good spirits, though.”

Despite their struggles, the source revealed the couple – who have a four-year-old daughter Sienna-Rae – are splitting on good terms.

“Its very amicable but theyve decided to go their separate ways,” the insider explained. “Alans been joking that hes having a mid-life crisis and he went and treated himself to a brand new car five days ago. Its a difficult time for both of them.”

“Theyre devastated the marriage is over but have vowed to stay friends. They still really care for each other.”

Alan, 35, and Lucy-Jo, 34, shocked the nation when they announced they were splitting two years ago – claiming their marriage had lost its spark – but they rekindled just six weeks later.

At the time, the couple made it clear that their daughter Sienna-Rae was at the top of both their priority lists. In a joint statement, they said: “They ask for privacy at this emotional time, to allow both to focus on their beautiful daughter Sienna-Rae, to ensure her continued happiness.”

Authorities in the US state of California are preparing to disembark passengers aboard a virus-hit c..

Coronavirus: US authorises use of anti-viral drug Remdesivir

The US's Food and Drug Administration (FDA) has authorised the emergency use of the Ebola drug ..

The UN secretary general says he has been “shocked but not surprised” by the global response to the ..